Meridian is the capital city of the Defiant faction. 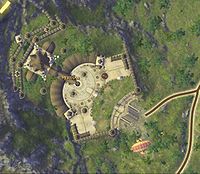 Meridian is a majestic city built of sturdy, polished sandstone, with towers capped with "twirling machines". Kelari refugees make camp at the base of the great stairway of the city, while the chanting of Sorcerer Kings can sometimes be heard in the city.[1]

The Defiant pursue research in technomagic in Meridian, with the "more exiciting" experiments carried out in the first courtyard. Faulty experiments sometimes unleash monsters into the city.[1]

Meridian was built over a former Abyssal nest.[1] The Faceless Man's betrayal of the Abyssal allowed the Defiant to take the nest and build their capital of Meridian.

"Welcome, Defiant, to Meridian. Enlightenment waits within these graceful walls, atop the towers of the learned. 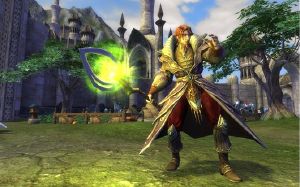 I am Orphiel Farwind. I haven’t the time to show you everything personally, but I shall tell you of some of our city’s wonders. I do appreciate scholarly questions, but please keep them in mind for later.

As you may have noticed, refugees from the Kelari Isles make camp at the base of the great stairway. Oh, don’t fear for the Kelari Elves. An adaptive people, if perhaps foolhardy, they are our welcome guests and allies.

From those stairs you can see majestic Meridian herself. Telara has not seen such deceptively sturdy walls of polished sandstone since the ancient Eth city-states. The sweeping towers crowned with twirling machines, the arabesques adorning the walls… it almost transports you back to the ancient Eth Empire! Listen, and you’ll hear the chanting of the Sorcerer Kings."

In pursuit of Progress 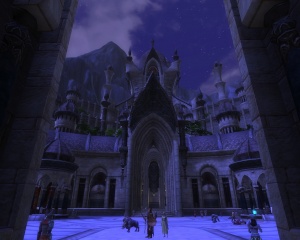 "Our more exciting experiments take place in the first courtyard. There, we ply the lost arts of technomagic, those sourcestone-fuelled feats that could banish the rifts from Telara and plunge everyone into the lap of luxury—if only the Guardians would cease their meddling.

If you visit this courtyard, do watch out for rogue water elementals. Meridian is built over a former Abyssal nest, so from time to time a faulty experiment unleashes one of Akylios’s spawn. Progress has its risks. The scholars usually banish the wretches before recalibrating their instruments.

Located in the second courtyard, our main portal can transport you to any other portal you’ve discovered in Telara. It’s for Ascended only, so I envy you its use. Try and warn mortals away—they lose too many limbs like that."

"Be sure to visit our military headquarters at the command center. Peruse our tactical maps at your pleasure, or speak to one of the emissaries from our various conflicts with the Guardians. They’ll be more than happy to ship you off to a Warfront. Yes, Asha Catari spends her time in the command center. Yes, she will notice if you stare.

Across the courtyard is the manufactory, where we hone our crafts. Many of the brilliant inventors out in the first yard began their careers putting hammer to anvil in our workshops. 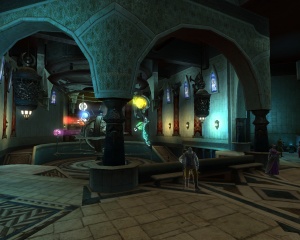 Just behind the manufactory you’ll find the College of Planar Studies. Behold, the most advanced orrery—that’s a moving model of the cosmos—in all Telara. In the center spins Telara herself, and the planes rotate around. Studying the alignment of the planes is vital to subduing and someday mastering their power.

Connecting the command center and manufactory is the indoor promenade where Meridian’s merchants hold bazaar. Remember, Meridian is no filthy Guardian hovel, and our merchants work eldritch wonders. Be sure and wave to Sparky, the potion-mixing automaton."

The Tower of Visionaries 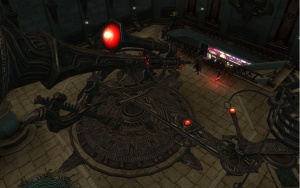 You should eventually find yourself in what my colleagues have generously called “Orphiel’s Spire.” This grand tower symbolizes Defiant superiority over all Telara. Note by your shortness of breath that the city constantly climbs skyward, just as we Defiant reach for the heights of power and innovation. You’ll be ascending the tower via short-range teleporter, so you can recover.

The Faceless Man waits by the first-story teleporter. I’m sure he does have a face under that featureless mask, but no mortal shall ever look upon it. He serves as contact for all Ascended heading into the Dragon Cults’ most dire strongholds, so you’ll be seeing him often. Do try to be cordial: Those horns are quite real, and his time among the Abyssal has made him cagey and dangerous.

The second story is the Mages’ level, where our arcanists develop new spells to employ in the name of progress. Clerics cement their bargains with cooperative spirits on the third story, and above them, Rogues practice the arts of stealth and… neutralization. Finally, my study forms the apex of the tower.

Oh! I’m afraid I don’t have time for questions after all. But do feel free to visit my aerie and look out upon Meridian. From there, even the other towers look small.

All Telara stretches out before the Defiant. You need only reach out and grasp it."

The End of Days[edit | edit source]

In an alternate timeline, The Guardians launched an assault on Meridian, burning the city and killing many Defiants, as well as destroying most of their machines. This pulled the Defiant out of the fight against the rifts. The destroyed capital of Meridian was consumed by Regulos as he devoured the majority of Telara.