East of Iron Pine Peak lies the Moonshade Highlands. Here, into Telara’s oldest mountains, the Dwarves carved Hammerknell Fortress. While other delves have their renown, Hammerknell has ever been the heart and soul of Dwarf civilization. Using a mysterious technique called runebinding, the Dwarves filled their capitol with wonder and luxury to rival the cities of the Eth, and last far longer.

But when the rifts came, something went horribly wrong. Like their kinsmen in Lord’s Hall, the Dwarves abandoned Hammerknell. Unlike at Lord’s Hall, their exodus was not disciplined but panicked, leaving a majority of the terrified Dwarves sealed within. No Dwarf will discuss their reasons for leaving, but the great delve’s tunnels spread far underneath Moonshade, and travelers claim to hear terrified Dwarves scratching at the stone deep underground, seeking escape.

Moonshade rests on Telara’s eastern coast, where pilgrims from Sanctum built the harbor town of Three Springs. Where there is water, Abyssal cultists sneak ashore, ready to turn the lush wilderness into a terrifying mire. Not only do pulsating Water Rifts burst across the skies over Moonshade, but quivering, clammy Watertouched skulk in Acrid Basin, Moonshade Pools, and Kelpmere, ready to drag explorers to a watery grave.

To make matters worse, Brenin, a Tidelord of the Abyssal, has reared his faceless head in Moonshade. Like the deepest waters for which they are named, Abyssal methods are dark, terrifying, and heartlessly efficient, and Brenin sends cultists through the Highlands, seeking a way into the delve. Whatever is locked within Hammerknell must be truly horrible if Akylios wants it so badly.

Death and Life Rifts likewise wreak havoc across Moonshade. While the leader of the Endless presence remains mysterious, a powerful satyr named Gorvaht has terrorized the countryside for some time. As in the Dwarven garden of Runic Descent, many local Lifetouched have been corrupted by Death, becoming dark and twisted where before they were vivacious… and twisted. It is possible that Gorvaht wishes to remain dedicated to Greenscale, and rages against this Deathly infection.

Back when Hammerknell prospered, the elite Runeguard were renowned throughout Telara: Dwarves who gave up a comfortable underground existence to protect their city’s gates under the alien sky. When their people fled Hammerknell, it was the Runeguard who closed the gates, sealing in whatever evil had awakened in the deeps, as well as thousands of their own people.

Since then, the Runeguard have been as living ghosts, fighting to keep Hammerknell sealed even as they are haunted by the pain of their abandoned kin. Rumors persist that some Runeguard are ghosts in the literal sense, chained to Moonshade by guilt. Some runecrafters still linger in Moonshade as well, and they might know what waits in Hammerknell, if they weren’t all murderously insane from the terror unleashed under the mountain. 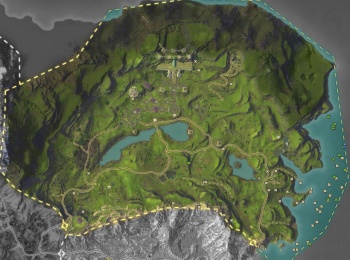 The location of various artifact collections in Moonshade Highlands.

Item set: The Dwarves of Moonshade