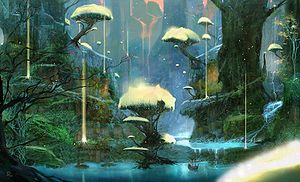 Concept art of the Plane of Life.

One of the six known Planes, from which Rifts enter Telara, and from which the dragon god Greenscale of the Blood Storm came, along with his faerie minions.[1]

Exploring Telara, you may find a lush oasis in the heart of a wasteland, where alien plants grow thick as corded sinew and heavy with fruit, and new species of beast prowl, displaying fur and plumage in unreal colors.

Turn away from such places, for if you wander in alone you may become intoxicated with scent and sight and lose all sense. By the time you realize the foliage has blocked out the sun, you will be bitten by legions of ravenous insects, and finally come to the center of the growth. There hangs the Life Rift, vines and roots spilling out, tearing the rift wider like fingers pulling at frayed cloth. One of the vines will notice you and dart for your guts like a viper as its end sharpens to a venomous spear…

The Plane of Life: nothing in moderation[edit | edit source]

There is no ground in the Plane of Life, and there is no sky. Both are overgrown with plants as exotic as they are deadly. Roots clash like enemy armies, shoving and scrambling, while vines bulge together, sprouting thorns to stab each other. Mere survival in this plane means no coexistence or compromise, only constant competition.

This is a place of beauty, but no peace, where eternity is one long, bloody chain. Childlike in loveliness and cruelty, a faerie torments wildlife with illusions and traps, until plucked from the air by a leaping raptor and chomped to bloody gobs. Plants pulsate and grow in around the reptile, forcing it to flee until a forest troll snatches it up by the tail and breaks its back on a tree trunk. As the troll feasts, the tree— actually a treant’s leg— uproots and crushes him flat. The treant moves for the first time in centuries, seeking a new spot to root until it succumbs to the poison of sun-bright flowers.

These and more are the denizens of the Plane of Life, obsessive in their will to survive by supplanting other species, like the amphibious boglings who eat and kill all interlopers, usually in that order.

Many of Telara’s most savage beasts are invaders from this plane. Dire wolves hunt the local game to extinction, and razorbeast boars trample like jagged boulders over any natural predator. The Plane of Life can warp wildlife into abominations like the shamblers: swollen toadlike heads pulled along by spindly arms, with no body but a mass of soggy leaves.

The Lifetouched have adapted countless tricks in their war for survival. Ecstatic satyrs might raid a village, calling barbed roots from the ground to bind their victims in place to be poisoned, while the goat-men heal their own wounds by regrowing flesh as a tree regrows leaves.[2]