Sanctum is the capital city of the Guardians faction.

The island on which Sanctum is built was gifted to the Guardians by the Vigil. Shortly after the sundering of the Ward, Dwarf leader Borrin Gammult came to the eastern coast of Silverwood after having received a vision of a divine city emerging from the sea. He witnessed rising of the solid stone island from the waters with his own eyes, and became the master architect of what would become known as Sanctum.

The Sanctum of the Vigil[edit | edit source]

The city itself takes its name from the domed basilica in its center, the Sanctum of the Vigil. Serving as the Guardian headquarters, the Sanctum of the Vigil is where Cyril Kalmar leads the effort to retake Telara from the Dragons, the rifts, and the Defiant, with the assistance of Borrin Gammult and Lady Shyla of the High Elves. Dominating the building is the Covenant of the Guardians, a ward of graven Sourcestone that protects Sanctum from the Dragons. The Order of the Temple coordinates battle against the Defiant, and across from them the Harmonious Crusade's priests summon Riftspawn—not to bargain like Defiant heretics, but to interrogate the monsters for the next spot the rifts will strike. The Consecrators, agents of the Guardians who track cultists to their hideouts and monsters to their lairs, make their headquarters here. Soul trainers reside on the mezzanine above, and the Council of Cardinals sends Guilds into terrible danger only to emerge unified and unstoppable.

A gift from the gods 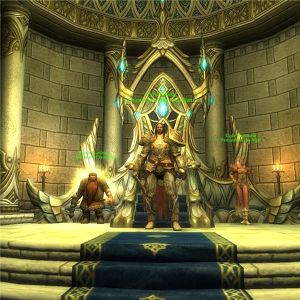 "Welcome, Guardian, to Sanctum. I am Cyril Kalmar. I see by your haste in reaching the Holy Seat that you are eager for new orders, another chance to strike at Telara’s enemies. But first, let me show you the city. Yes, personally. I am no king to sit a throne and detach myself from my fellow Guardians.

From this chamber, I command our efforts to retake Telara from the dragons, the rifts, and the Defiant. On my left stands Lady Shyla of the High Elves, Pentarch of the Vigil. At my right hand is Borrin Gammult, leader of the Dwarves and the master architect of Sanctum itself.

Shortly after the sundering of the Ward, when the first Guardians returned, Borrin received a vision of a divine city emerging from the sea. He came to the coast of Silverwood, and an island rose before his eyes, solid stone with high, sheer sides. As the Vigil gave us the site for a city, they have given us a chance to restore Telara. Always remember, the gods give the gift of opportunity; the triumph must be our own.

The Sanctum of the Vigil 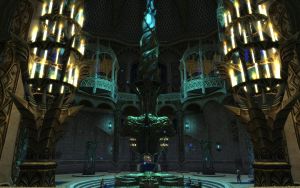 "The city takes its name from this domed basilica, the Sanctum of the Vigil. Dominating the Sanctum is the Covenant of the Guardians. So long as we keep to the will of the gods, this ward of graven sourcestone will protect Sanctum from the dragons.

If you yearn to strike at the Defiant, seek out the Order of the Temple on the ground floor, and they will happily send you into battle. Across from the Order, the Harmonious Crusade’s priests summon riftspawn—not to bargain like Defiant heretics, but to interrogate the monsters for the next spot the rifts will appear. You will grow in the Crusade’s esteem with every rift you close.

On the mezzanine above, trainers stand ready to help you commune with every soul you meet on your journeys. The Consecrators make their headquarters here, agents of the Guardians who track cultists to their hideouts and monsters to their lairs. They will send you where Telara’s enemies hide even from the gods. Slay these monsters in the darkness or cast them into the light, but at all costs end their vile existence.

On the day the Ward cracked, my companions and I faced horror I do not care to describe, and the struggle forged us into an unbreakable fellowship. So will the Council of Cardinals send you and your guild into terrible danger, and you will emerge unified and unstoppable, a force to make our enemies tremble."

Consecrated to their purpose 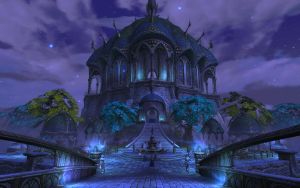 Come out into the open air and look upon the bridge connecting Sanctum to Silverwood. Pilgrims cross daily to worship at our shrines of the Vigil. Mighty Rhamm Dragonbane patrols the bridge, for this is his foretold destiny. He is fortunate; most Guardians will struggle to find just what fate they were resurrected to fulfill.

We’ve ringed the central dome with a broad boulevard, split into districts dedicated to each of the gods. Between the bridge and the Sanctum of the Vigil is Tavril’s Plaza, a garden of tranquility tended by druids, where bards sing and the dome looms majestic.

On our left is the market of Thontic’s Row, where you’ll do your banking and auction the spoils from your adventures, but I thought we would turn right. I have something to show you.

Breathe in the smoke from Bahralt Street. Master craftsmen please the God of Cities and Civilization, forging wonders. No doubt you will put their labors to good use, much to the woe of riftspawn everywhere.

Notice how the bards’ gazebo has a clear view of Thedeor’s Circle, where Guardians come to spar, and you’ll realize why so many of our songs are about epic duels. Here, you will hone yourself into a divine weapon. Ah, if only I had time for a brief sparring match. Maybe another time. And I promise not to insult you by holding back.

At last, what I wanted to show you: Mariel-Taun’s Village. In the name of the Goddess of the Heart, we have built this home for Sanctum’s mortal residents. Here, those faithful to the Vigil run shops and offer services you will find invaluable in your journeys.

This is the most important part of Sanctum, my friend. A living reminder that though we Guardians are chosen by the Vigil, this is what the gods brought us back to create: a place of peace and joy in the shadow of divine grandeur. 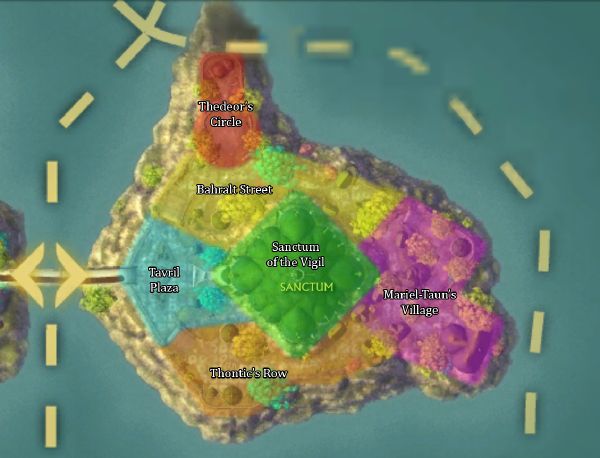