An area in Gloamwood with a multitude of undead.[1] The area was first revealed visually in the Gloamwood Flythrough video at about the 0:33 mark.[2]

Rumors swirl through Gloamwood Pines. Locals claim to have seen lights coming from Shadefallen Keep, abandoned since the dead rose over a century ago, and fear that agents of the Endless Court have trickled like a bitter creek over the crags and into the heart of the forest. Supposedly, an ancient artifact was lost in Gloamwood, and only evil can come of death cultists getting their hands on it.

Even if these rumors are true, and heroes defeat the cultists, the residents still say that “when you stop one threat in Gloamwood, another one always rises in its place.” Some Ascended are undone when they realize that Telara’s salvation is but a pinprick of light at the end of an impossibly long tunnel. Many more realize that Gloamwood’s ruin is testament to the cost of failure, and plunge headlong into the dark forest. 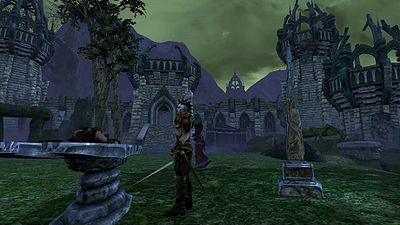