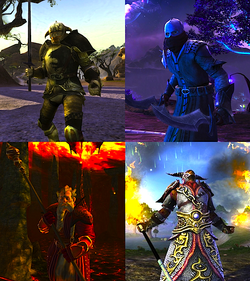 Souls are the classes in Rift: Planes of Telara, each with a full set of abilities and a class tree. Players choose one soul at character creation, and can eventually take on up to three souls within a particular calling.[1] There are 336 possible class combinations, or 224 when not counting the PvP soul. 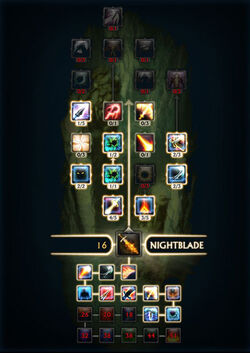 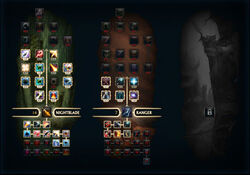 Souls are the classes in Rift: Planes of Telara. Each soul is a full-fledged class with a soul tree of skills and abilities in which players can invest soul points, and a player can utilize up to 3 souls at once.[2] The soul system allows players to greatly customize their characters - a character can be built to be either group, PvP, or solo-centric.

During the introduction zone (Terminus for Defiants and Mathosia for Guardians) players will have the opportunity to pick three souls as they progress through the zone. Once leaving the starting zone, players have to wait until they are level 13 and then will have to complete quests to gain their additional souls.

Players can only equip a souls from a particular Calling (Warrior, Cleric, Rogue, or Mage) but the skills and abilities granted by the various souls within a calling may deviate from your calling's normal skills. A Riftstalker, for example, is a "tanking or durable rogue"[3].

Players can swap out souls and save multi-soul builds into a total of five roles (Patch 1.2). Players will have to pay a fee for swapping out souls if they have invested points into the particular soul that they wish to replace. The fee goes up each time the reset option is used (maximum of 50 gold). There is no cooldown on switching souls, but a player will have to be out of combat to do so.

When a character first enters the game, they have no Ascended souls. The first quest a player encounters is the acquisition of the character's first soul. Characters acquire their second soul through a quest shortly after the first soul, then a third soul is given near the end of the starter area. So, by the time a character finishes the starter zone and enters Telara proper, the player will have three souls.

Each character will eventually gain access to every soul of their calling. Characters can buy souls from their class trainers in any location. Each soul costs 20 gold, and you can not buy duplicate souls.

One notable exception to the acquisition of souls is the calling's PvP Soul. This soul is obtained by purchasing for 2500

, which is gained through participation in warfronts.

When you spend a point on a skills in a soul, your total soul points in that tree increases, which is known as increasing your affinity level for that soul.[4] Base skills in the tree are granted based on how many points you have in the tree. There are a total of 66 points which you can spend when you have reached max level. You gain the ability to slot a second soul and a third soul in the introduction area.[5]

Russ Brown, the vice-president of development at Trion Worlds, recently elaborated on the concept of social souls at PAX2010 in Seattle. Novelty souls may allow players to specialize in various social activities such as dancing or creating fireworks displays. This feature is in the planning stages and as such they are not yet available in the game.[6]

Souls are heroes from Telara's past "who either banished or imprisoned the dragons"[7], and who have come back from the dead either by the power of the gods or machines.[7]

Behind the Scenes[edit | edit source]

Russ Brown has explained that because players are allowed to swap souls, the developers are spending more effort balancing the callings rather than every combination of souls: "because we allow you to swap, we can have builds that suck".[8]